There’s nothing quite like experiencing a sturgeon fishing trips and going after a fish that has existed since the age of the dinosaurs and can grow up to 1000 lbs. The infamous surgeon has been a challenge for generations of anglers looking for the Mt. Everest experience of the sports fishing world. When they say “I’m going to climb that there mountain” in this case you’ll be reeling the mountain in on a hook, line, and sinker. As far as catching these monolithic creatures, there’s no better place than the Columbia River located in the heart of the Pacific Northwest.

The Columbia is home to several species of freshwater fish like walleye, trout, bass, shad, smelt, lamprey, and catfish. However, the most notable are of course white sturgeon and the five species of salmon such as chinook, coho, sockeye and steelhead. The large variety of fish in the Columbia provide the perfect menu for the dietary needs of Pacific Northwest sturgeon and is one of the main reasons sturgeon populations still thrive in the region. Another great benefit of the Columbia is that it’s one of the few rivers that Sturgeon retention is still allowed. These fish are referred to as keeper sturgeon, which are essentially immature sturgeon that reach the 4 ft. to 5 ft. range, weighing about 40 lbs. – 60 lbs. The best part about this particular size of sturgeon is that they’re really good eating. However, if you’re looking to catch them on a Columbia River sturgeon fishing trip for some fresh caviar your out of luck. Unfortunately sturgeon of this size are not mature enough to produce eggs. Basically, you’ll have to buy your caviar elsewhere, but you’ll have a good chunk of premium white meat of take home. 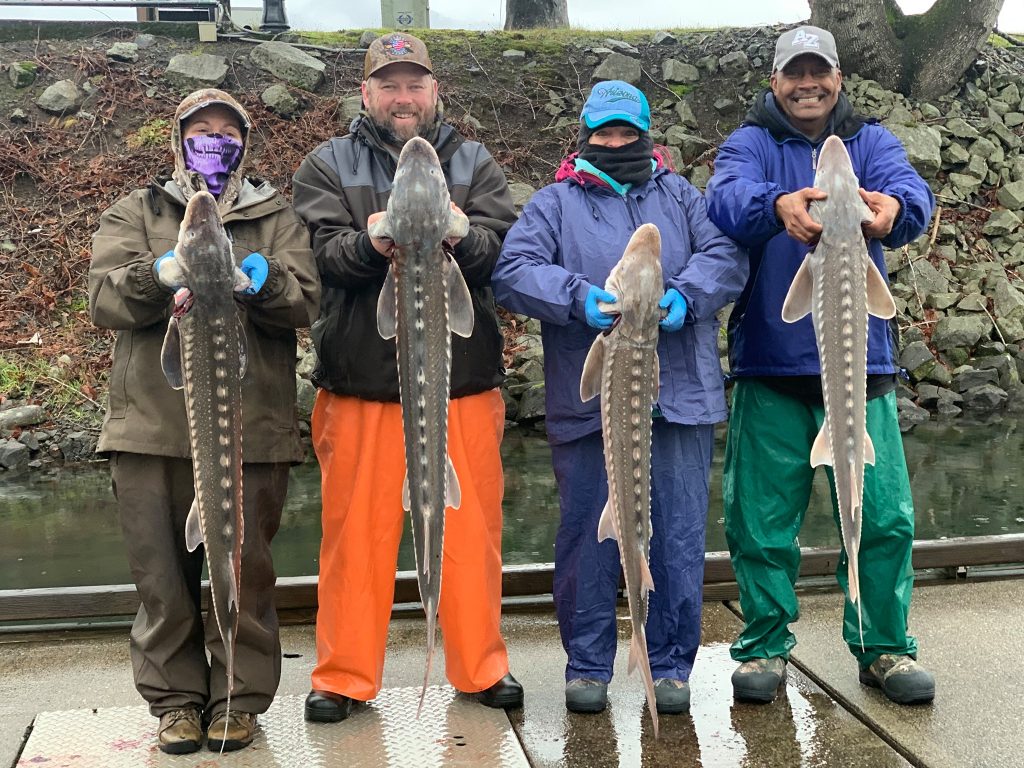 During the spring and fall is the primary time for the keeper season, but the Oregon and Washington Departments of Fish and Wildlife can close the fishery rather fast depending on the catch quotas reached and what the states have set for slot limits. When these fisheries close down, we focus on the trophy class fish. When we say trophy, we’re talking about sturgeon in the 12ft. 600 plus lbs. range. These fish are real beasts and we love offering guided sturgeon fishing trips targeting these monsters of the deep.

The giant white sturgeon is the stuff of lore. There are even tales of urban legend about the sturgeon angler who was trolling along fishing for sturgeon and he and his wife decided to take a little nap. In a moment of sheer genius, he decided to wrap the line around his foot so he would be awakened if he just happened to get a fish on. Apparently, his wife went to sleep in the cabin while he stayed on deck. Next thing you know the wife is rudely awoken with a crash as the boat runs ashore. For some reason her husband was nowhere to be found. Surprise, surprise, the fisherman was never seen or heard from again. Moral of the story is that if you’re fishing for sturgeon don’t take a nap and tie your rig to your foot unless you’re looking to get out of a bad marriage and disappear for life or become fish food. 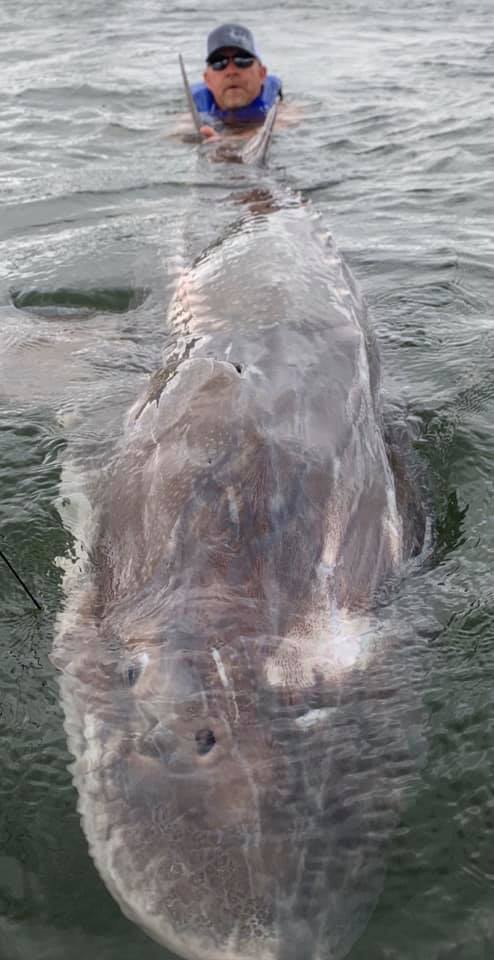 One thing for sure, there’s no mistaking the raw power of a fish that weights 8 to 10 times more that most humans do. Catching one is a matter of will and intelligence. Heavy fishing gear is a key requirement for success when fishing for sturgeon, we use heavy duty rods and reels, similar to what is used for catching big game fish like grouper or sailfish in the ocean. In the lower sections of the Columbia River we focus on catch and release fishing and target some of the big ones in several key areas sturgeon like to stake up. A couple of the best places to fish for white sturgeon is the lower Multnomah Channel and up further at the mouth of the Willamette River. These are staging areas for some decent size fish as they move between the mouth and the Bonneville while feeding.

These fish are big enough to give your arms a good workout and the fishing is generally pretty good. At the mouth of the Willamette you’ll be fishing between cargo ships or next to the pilings, in deeper water, when all of the sudden, wham! The reel starts to squeal. One thing that never ceases to amaze me is the ferocity displayed as a sturgeon surfaces. It’s not unusual for even a 400 lbs. fish to leap out of the water trying to shake the hook. These fish can take well over an hour to land and can wear out the arms of the entire crew before you even get a chance to have a look at it. Granted how many times in your life will you catch a fish that weights more than you do. unless you go on allot of sturgeon fishing trips I’d imagine not often.

If the fishing isn’t so hot at the mouth of the Willamette, there are a few other great sturgeon fishing spots on the Columbia in the Portland area. On our way up to the Bonneville for example there’s a spot just below the I-5 bridge on the Vancouver side of the river. This location offer deep flowing waters that can produce good catch rates. However, there tends to be allot of boat traffic so we do our best to be careful when fishing here and give cargo vessels the right of way as not to interfere with the local shipping industry.

Next spot is further up-river at the mouth of the Sandy which is another renowned river for salmon and steelhead fishing as well. Sturgeon follow and feed on the smelt and shad as the enter the Sandy River to spawn making this a great spot to anchor and slip a few candle fish or a shad on a hook and let it drop to the bottom. Before long you’ll be in for a ride as a sturgeon takes the boat for a toe around the river. Never fear, we’ll have that beast up to the boat in no time at all and the it’s just a matter of high fives. 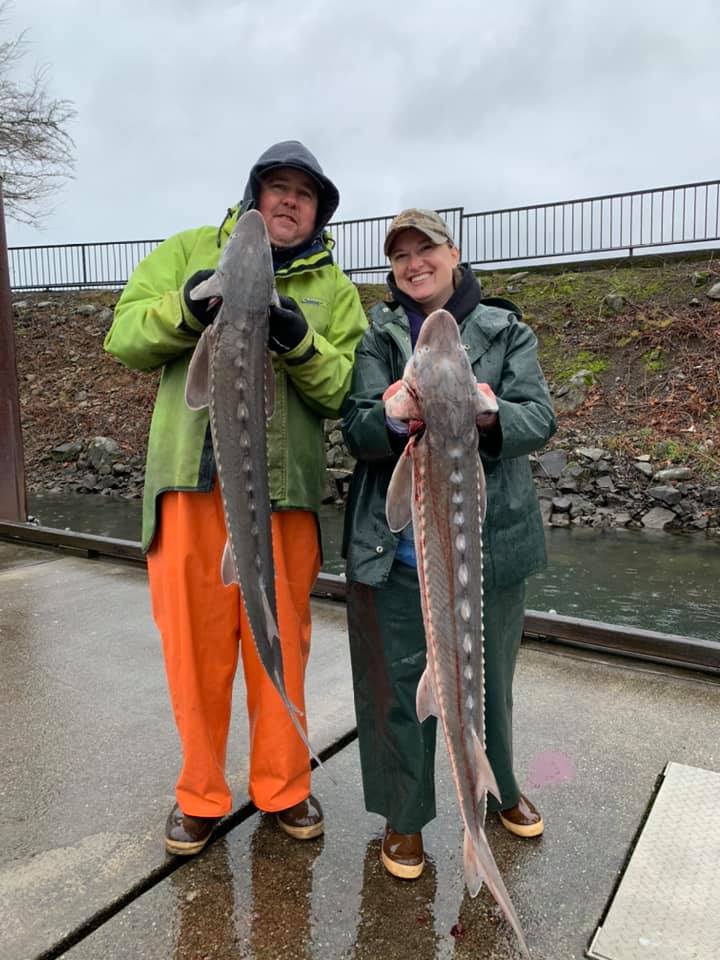 Up above the Bonneville in the Bonneville pool by the dam is another great spot to target big ones in the deep water but the upper dams are known for the real big fish. Both the John Day and McNary Pools of the Columbia are home to some of the biggest sturgeon on the state. They also offer excellent keeper sturgeon fisheries. It’s not usual to hook into 30 plus fish a day with an occasional 10-footer in the mix. These two sections of the river is home to one of the largest sturgeon populations in the Pacific Northwest. We tend to spend allot of time in this section after the chinook salmon season has tapered off and our clients are looking to experience the thrill of catching a tug boat. Probably the best element of fishing for sturgeon in the Columbia River is the amazing scenery and the lush vegetation, rolling hills, and other beautiful views like the infamous Beacons Rock. We offer these guided sturgeon fishing trips year-round and cover pretty much the entire upper and lower sections. If you’d like to experience the thrill of catching one of these amazing fish feel free to give us a call at (503) 490-3099 and book your Sturgeon fishing trip today with Buddy Dupell of Columbia River Fishing Adventures.