When it comes to fishing for salmon in the Pacific Northwest, the states of Oregon and Washington hosts some of the best salmon fishing the region has to offer. With over five species of salmon available, fishing for salmon is literally a year round event.

The epicenter of this infamous fishery is the renowned Columbia River where millions of salmon journey to the spawning grounds every year. At 1240 miles long, the Columbia is the fourth largest river by volume in North America. Forming in Lake Columbia approximately 3.5 hours south West of Calgary Canada the Columbia flows about 240 miles through Canada and onward into Washington State. The Columbia cuts its way way through Washington almost splitting the state in half until it ultimately bends it’s way to the Pacific Ocean forming the border between the Washington and Oregon before dumping out into the sea.

The cold deep waters of the Columbia offer the perfect habitat for several species of fish from Pacific Northwest salmon and steelhead, to shade, lamprey, bass, sturgeon, walleye and even catfish. With dedicated salmon runs during the Spring, Summer, Winter and Fall, the Columbia River is hard to beat in regards to having opportunities to catch these beautiful and exciting fish. Anglers and fishing enthusiasts brave all kinds of weather conditions to take part in this amazing fishery, but the best times to fish for salmon on the Columbia first you’ll need to decided what species your most interested in catching.

After you choose between the infamous Chinook salmon, Sockeye, Coho or Steelhead it’s fairly easy to determine the best times to go after them given the various seasons that salmon fishing is allowed. The Columbia River Salmon fishery is regulated by both Oregon and Washington and seasons can fluctuate based of catch rates and the overall numbers of fish that are counted as they pass the Bonneville Dam. 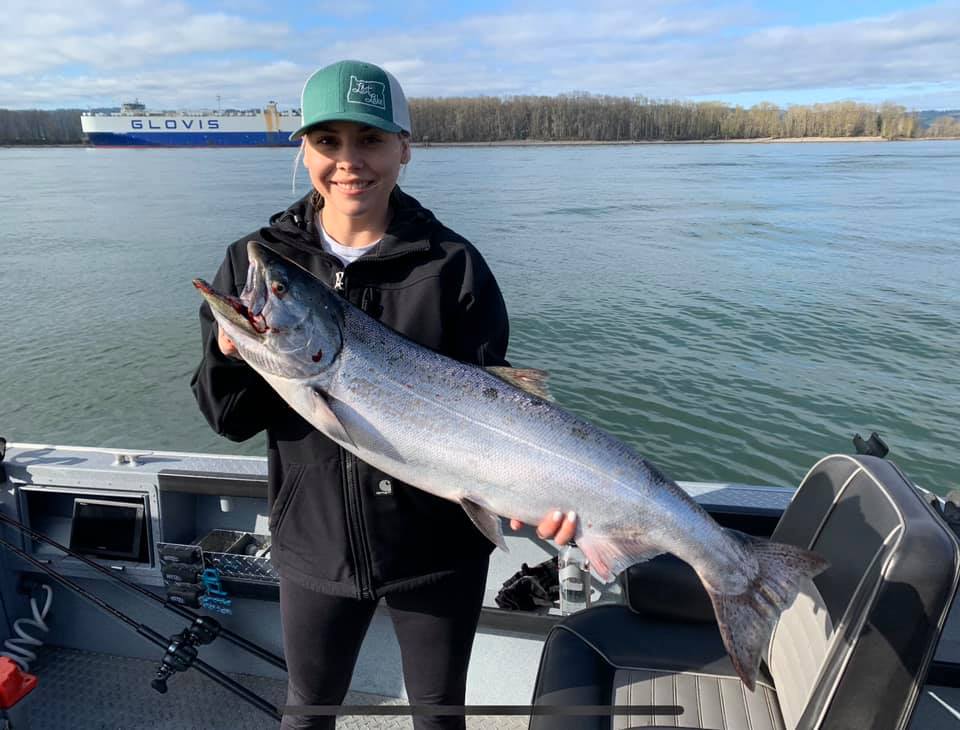 Best Times to fish for Salmon

Once you’ve determined the salmon species you most desire to catch it’s just a matter of dialing into the run times and knowing where the fish tent to stack during their Prospective runs. If you are new to the fishery there are hundreds of Washington or Oregon fishing guides that will take you out to the best areas on the river. As you might image, in the winter months the action on the Columbia is fairly slow. This is largely due to the fact that the weather is cold and miserable, but not the availability of fish to catch.

Even in light of the cold weather, the bravest of the brave still venture out as the howling wind blow across the Columbia chilling to the bone. Even with the frost on the eyelets of ones pole the action doesn’t stop for anglers seeking out the salmon close cousin the ever colorful Pacific Northwest Steelhead.

In the months of November, December, and January the best place to target these fish in the Columbia is a section of the river known as the Jon Day Arm. There are two primary runs of winter steelhead on the Columbia referred to as the A run and the B runs. The A run offers up steelhead in the 6-12 lbs. range while the later B run produces trophy class fish with steelhead catches ranging form 13-25 lbs. If you dare this fishery can still be very exciting as steelhead tend to be acrobatic fighters which helps take the edge off the cold.

As the winter fades and the snow begins to melt off the Cascade mountain caps, fresh cold water from the endless rivers, creaks and streams begins to feed the Columbia signaling the spring salmon season is soon to be at hand. As early as March, the most prized of the salmon species, the Columbia River Spring Chinook enters  the Columbia river drawing opportunists from around the globe to try and catch these fantastic eating fish.

Known for the exceptional quality of the meat diehard anglers, fishing enthusiasts and numerous fishing guides descended upon the Columbia in hopes of catching these ultra bright huge fish. The main action begins in the lower sections of the Columbia at the mouth near Astoria and Buoy 10. This fishery tends to be very hot but only for a short time as spring chinook work their way to the Cowlitz and Lewis rivers on the Washington side of the Columbia.

In contrast spring chinook also head for the Willamette and Sandy rivers in the Oregon where several Oregon fishing guides can be seen anchored out in front of the mouth plunking bait. As the season goes on large numbers of spring salmon head up to Drano Lake and the Kalama River. This fishery takes place in the middle of spring and produces decent catch rates all the way up to the Hood River in Oregon. During the last months of spring these mighty fish have made there way to the upper sections of the river where anglers can still catch bright fish as far as the Klickitat, Yakima, and Snake rivers.

As the Spring salmon season fades in the month of June, millions of Sockeye salmon begin their long journey in the Columbia. Interestingly enough even though Sockeye salmon offer up some of the largest runs of all the species in the Columbia River, very few are ever caught in the lower reaches. Both Washington and Oregon Fishing Guides generally target these fish in July below the Wells Dam or the Brewster Pool. Limits for Sockeye are usually very generous and the quality of the meat is almost as good as the infamous springer. 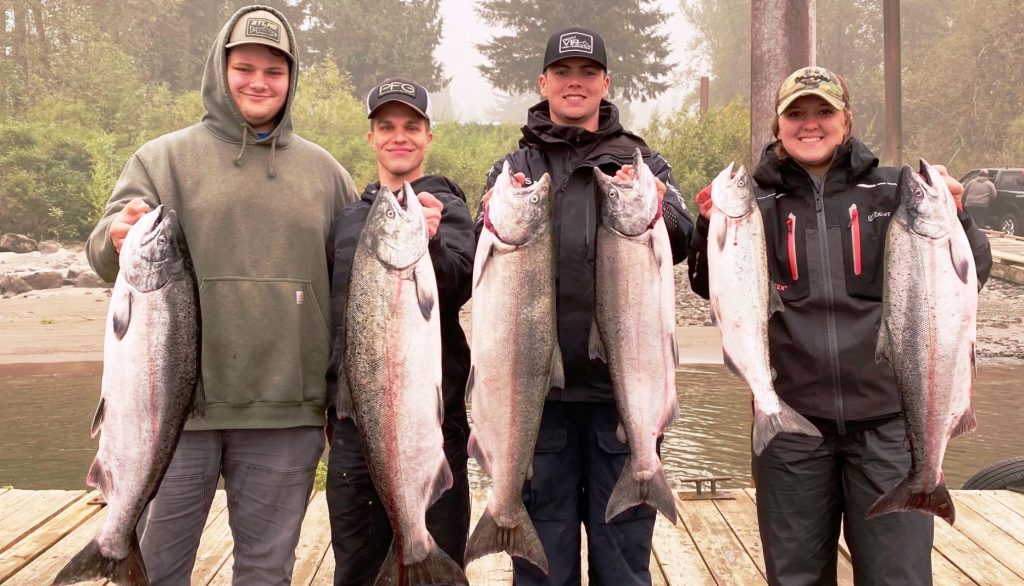 When the summer months begin to peak during the month of July, the Fall Chinook Season begins. This fishery is sometimes hit and miss depending on how long of a window is open for chinook salmon retention. The Fall salmon season is by far the biggest fishing event to take place on the Columbia River with most of the action happening in the lower sections of the Columbia. This is due to the fact that Columbia River fall chinook don’t have as far to travel to their spawning grounds. As with the spring Chinook fishery the fall Chinook salmon season starts out at the mouth where anglers target this fish near Astoria and Bouy 10. The bulk of the action taking place between the mouth all the way up to the Bonneville dam.

Over the years Washington and Oregon have decreased the amount of time anglers can catch these fish with in season in closures due to catch rates versus run sizes. However, even with reduced chinook seasons and the possibility of closures, by the time August rolls around the Fall Coho action takes center stage. These fish generally show up in good numbers and are considered by many to be better eating than all the other salmon species. This is due to the fact that Coho tend to hold up very well during spawning and don’t deteriorate as rapidly as other salmon do. The Columbia River Fall Coho season provides excellent fishing opportunities all the way up until the end of November with pretty much solid catch rates all season long.

When it comes to fishing the in the Pacific Northwest these are the absolute best times to fish for salmon on the Columbia river. When you decide what time is best for you give Buddy Dupell of Columbia River Fishing Adventures a call. Buddy is one of the few full time fishing guides that provide year round fishing trips and is considered by many to be one of the best fishing guides to offer Guided Fishing Trips in Oregon.